Tune into your city’s heritage 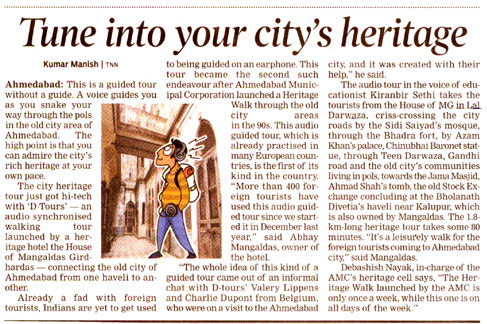 AHMEDABAD: This is a guided tour without a guide. A voice guides you as you snake your way through the old city area of Ahmedabad. The high point is that you can admire the city’s rich heritage at your own pace.
The city heritage tour just got hi-tech with ‘D-Tours’ an audio synchronised walking tour launched by a heritage hotel the House of Mangaldas Girdhardas connecting the old city of Ahmedabad from one haveli to another.

Already a fad with foreign tourists, Indians are yet to get used to being guided on an earphone. This tour became the second such endeavour after Ahmedabad Municipal Corporation launched a Heritage Walk through the old city areas in the 90s. This audio guided tour, which is already practised in many European countries, is the first of its kind in the country. “More than 400 foreign tourists have used this audio guided tour since we started it in December last year,” said Abhay Mangaldas, owner of the hotel.
“The whole idea of this kind of a guided tour came out of an informal chat with D-tours’ Valery Lippens and Charlie Dupont from Belgium, who were on a visit to the Ahmedabad city, and it was created with their help,” he said.

The audio tour in the voice of educationist Kiranbir Sethi takes the tourists from the House of MG in Lal Darwaza, criss-crossing the city roads by the Sidi Saiyad’s mosque, through the Bhadra fort, by Azam Khan’s palace, Chinubhai Baronet statue, through Teen Darwaza, Gandhi road and the old city’s communities living in pols, towards the Jama Masjid, Ahmad Shah’s tomb, the old Stock Exchange concluding at the Bholanath Divetia’s haveli near Kalupur, which is also owned by Mangaldas.

The 1.8-km-long heritage tour takes some 80 minutes. “It’s a leisurely walk for the foreign tourists coming to Ahmedabad city,” said Mangaldas. Debashish Nayak, in-charge of the AMC’s heritage cell says, “The Heritage Walk launched by the AMC is only once a week, while this one is on all days of the week.”